Councillors Shania Richards, aged 24, and Dylan Cowley, 25, are youthful voices in a chamber traditionally run by older members of the community.

The need for younger voices was something outgoing councillors noted before retiring last year.

Ms Richards and Mr Cowley see being advocates for younger generations as key to their role in local government.

"If you're not a youth and you don't know what's happening with the youth at the time, and the struggles they're going through, then how are you meant to help them and give them solutions."

"I've lived in Port Lincoln in my entire life. I've been here in Port Lincoln living and working and I do really love this city and I want to make sure that it's the best place that it can be," Mr Cowley said.

A former YMCA Youth Parliament Member and Governor, Ms Richards grew up between Port Lincoln, Kalgoorlie and Esperance. Her father is Barngarla man. Her mother is Wongatha woman from Kalgoorlie.

"I'm a huge nerd. I love reading and learning. I also play clarinet," she said.

Ms Richards' education background includes a degree from the West Australian Academy of Performing Arts and qualifications as a chef. More recently, she had worked in the construction of powerlines across the Eyre Peninsula and as a reporter on ABC children's news program Behind the News.

Both Ms Richards and Mr Cowley have connections to mental health work. Ms Richards volunteers with Headspace, and Mr Cowley works at West Coast Youth. The pair are also friends, having met nearly a decade ago at Port Lincoln High School, spent time together at Passionis Productions and worked alongside each other at YMCA Youth Parliament in Adelaide.

Port Lincoln City Council spotted their potential, and agreed to sponsor them to go to Youth Parliament to learn more about public administration. Both young people now have a voice in shaping the community.

The birth of his son provided Mr Cowley extra motivation to run for councillor.

"Especially now that I have a son and a family developing, I want to make sure that my children and by extension, my children's children, when they eventually come along, live in a place they can be proud of."

With a chance to promote change, Mr Cowley said he was keen to break down barriers between the council and the community.

"There is an observed disconnect between the council and Port Lincoln, and that is on both sides. No one is to blame," he said.

"We see it a lot in the youth as well. A lot of people don't understand what the role of council is and there's just this obvious gap and one of the things that I want to do is to try and bridge that."

Both councillors consider advocating in the chamber for mental health issues as important.

Ms Richards said the negative influence of social media on youth mental health was something older generations had not experienced when growing up, and the issue demanded a younger voice to articulate it.

"There's a lot of people now that deal with anxiety simply because of things in social media or what's going through their timeline," Ms Richards said.

"Now you can see anything from across the world straight from your phone. A lot [of social media users] get overwhelmed every day and they don't realise."

Mr Cowley said his role at West Coast Youth gave him contact with people across the community who were struggling.

"It keeps me in touch with the community so that when I'm in council and something comes up about a certain area of town or about schools... I am actually connected. I have that perspective of being like, 'Well, I actually talk to these people'".

Listening to people is a core part of Ms Richards' volunteer work at Headspace, she said, adding that it reminds her daily how smart the young people in town are.

"I just want to be someone that can listen and offer that ear and that shoulder to anyone that needs a yarn," Ms Richards said.

"I really love volunteer work. I just really enjoy the reward of helping young people find their path and their true identity. Helping them blossom to their true selves."

"I feel like [young people are] often overlooked as people that aren't able to think for themselves or speak for themselves, when the kids actually very clever and all they need is for us to listen to them sometimes." 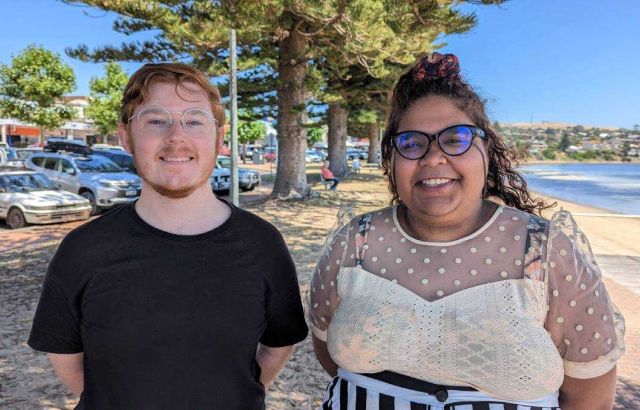